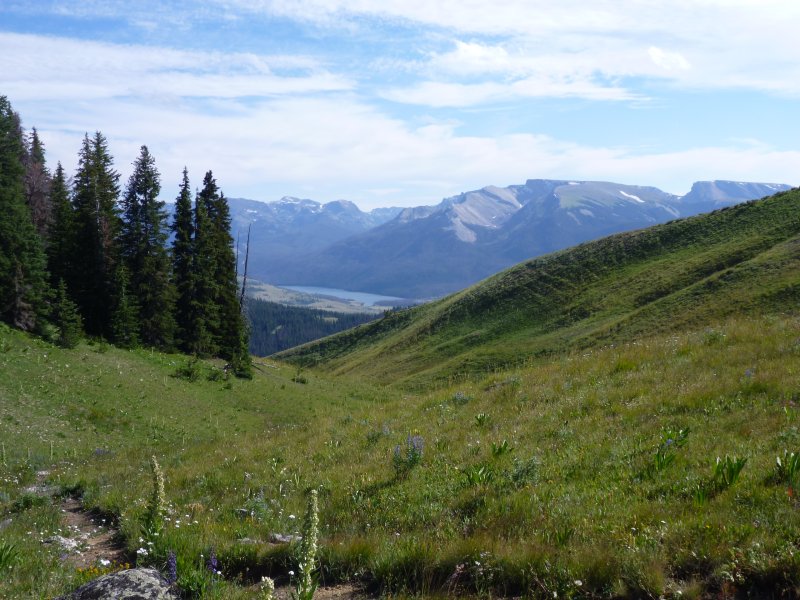 Had a very restful sleep, beat my alarm clock awake by a fair margin. The start of the morning was rough, my shin was not feeling good at all! I hobbled for the first while until the ibuprofen kicked in and then I ran into an awesome northbounder named Flaxseed. He was older and “only” doing northern Colorado and Wyoming. He’s from Texas and we chatted for a bit about trail conditions both ways. I asked him if he had a tensor bandage to spare (compression for the shin splints), and he had something better! He gets shin splints sometimes as well so he carries a shin/ankle compression band, and he gave it to me! It was so nice of him and really helped the rest of the day.

After we went our separate ways, I hit a great wide open plateau with views of the Winds and Tetons. The rest of the morning was spent walking in lowlands towards the Winds, generally not on any trails.

In the afternoon I got onto brand new trail (later confirmed to be built this year). Soon after I met two more NB hikers, Robert and Jason. They were very concerned about getting lost and not too excited when I told them there wasn’t too much trail to the north.
I slowly climbed my way up to Gunsight Pass, mostly in forests. When I hit the pass, it all opened up and I was in the Winds!

Coming down the pass was brutal on my shin. I finally got to the bottom and met some more hikers, Jeff, his partner (name forgotten), and Hui (who I last saw in East Glacier!). I sat down with them and had dinner (they had caught fish and were frying them up on a fire). Hui updated me on the locations of a bunch of hikers, apparently I passed a few going into and out of Dubois. I had thought I was the last one!

I popped over a ridge after dinner then had another long, painful descent into Green River. Amazing views all around though, with a setting sun too! I also saw a fox jump out of a bush 15 feet in front of me, then run off as soon as it saw me. Very red, with a bushy white tail, but also quite small… Anyways, very neat end to the day!