Technology on the trail 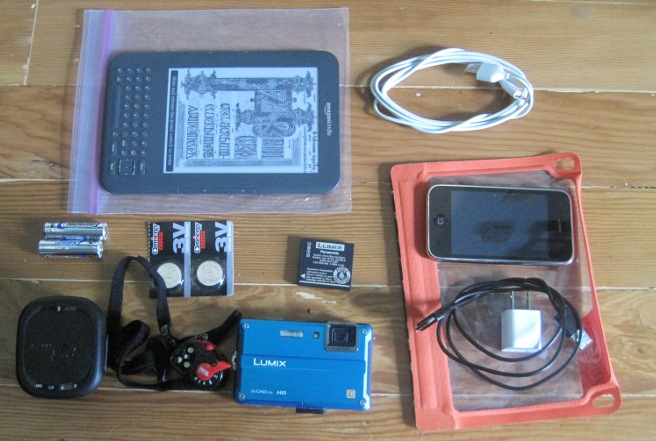 In the past I would have considered myself quite a snob when it comes to tech toys in the wilderness.  I prefer to hike with as little as possible.  On the PCT I carried a small camera and a headlamp (and extra batteries for both).  For the CDT, I’m adding a Kindle, iPhone, and SPOT Connect (along with batteries and charging cables).

The Kindle was actually the easiest one to justify to myself.  It has incredible battery life, claimed to be 30 days of reading, which I will be testing vigorously (I read a lot).  On the PCT I usually carried a paperback book, and occasionally two.  The Kindle weighs less than an average paperback. I’m no more concerned about getting it wet than I was for a book (for either, a ziplock will keep it dry enough).

The iPhone will be doing a lot of things in moderation for me.  It has relatively poor battery life and I am stubbornly refusing to carry any kind of solar charger (heavy).  I get ~16 hours of use every day out of it, so I figure with no WiFi, 3G, or phone portion turned on, it will last a week or two if I generally keep it off.  The main job of my phone will be to use its GPS – I have an app called GaiaGPS which contains the same maps as I have on paper, but can provide me my exact location along with larger area maps.  This is useful if I ever need to find a way out of the wilderness if I get in trouble.  Additionally, I’ll be using it to write daily journals which will be sent when I get access to WiFi or a data connection in towns.  Finally, it will allow me to get the lightest kind of SPOT, which uses Bluetooth to talk to an iPhone app.  I’m also looking forward to not having to beg for computer access when I’m in town.  An iPhone can do most of what I want – email, ordering gear, phoning home, etc.

SPOT Connect is a relatively new thing, a little cube of warm, fuzzy safety.  By itself, all it can do is send out an SOS signal via satellites which calls in the cavalry (aka a helicopter or SAR team).  When paired with an iPhone, it can send mini-status updates via the same satellites whenever I like.  My plan is to send daily updates from my camp each night.  Once I get hiking there will be a map you can view showing my expected path and where I am along it.

Overall I’m somewhat ambivalent about all this stuff.  I work with computers all day, and one of the joys of hiking for me is how it simplifies my life.  As I’ve gone through the planning process for the CDT though, I’ve discovered that the complexity of this trail relative to the PCT requires some compromises.  I was surprised by the demands of my family and girlfriend to stay safe in contrast to the PCT where this was never mentioned.  I suspect no one realized how remote and wild the PCT was until I started calling home and sending pictures.

This entry was posted in CDT, Gear. Bookmark the permalink.

6 Responses to Technology on the trail