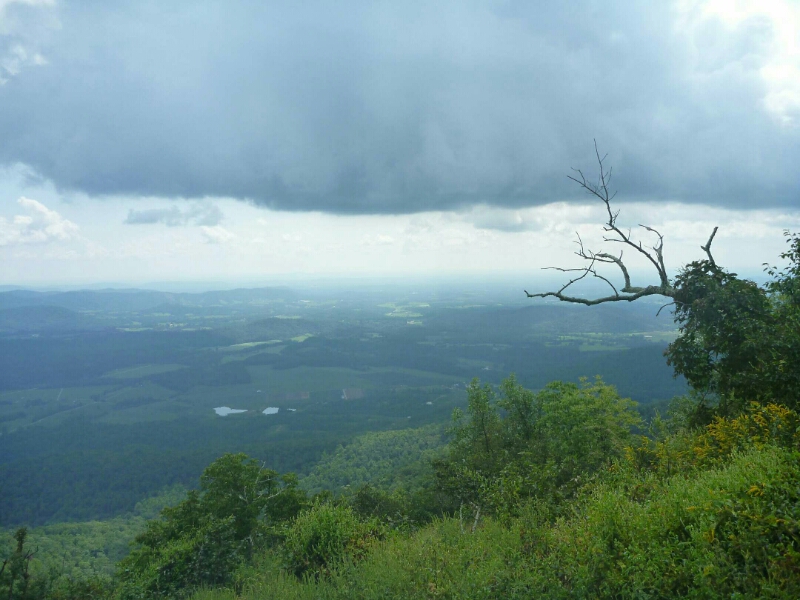 Big climbing day today, starting with 3 Ridges Mountain straight out of camp. After we got up that, we had to drop down 3000 feet to a river, then up 3000 to the top of The Priest, our first 4000 foot mountain since New Hampshire. This was all done by early afternoon, so the rest of the way we just stumbled along the ridges until we hit camp early at 5pm. We hung out with Brown for a couple hours then went to bed.

Mk: we did see many animals today! A deer with a small set of antlers coming in, a box turtle looking very out of place on trail well away from the water (?!), a salamander swimming in a creek we got water from, and lots of frogs jumping out of our way on-trail. I really like the frogs – some the size of my first and some as tiny as my pinky finger nail! These little ones were all over in Massachusetts. But, the best are the fatter ones who try to jump the “bank” off the trail, but are too fat, so they flop upside down we back onto the trail instead… I usually stop in my tracks for these ones so Ryley won’t step on them (and to laugh…)!

Other “wildlife” we’ve seen on the hike has included: many grouse (always waiting until the very last minute to use their tried, tested and true defence mechanism of waiting until you’re right on top of them to fly all of 4 feet away and scare the bejesus out of you!), bunnies!, jack rabbits (a really mangy and unafraid one at a shelter in Maine), a moose cow and calf, lots of deer, 4 bears, turtles, a wild turkey, newts, salamanders, a rattle snake, many other snakes of varying size (~4″ -to ~4′) and scariness, many birds including herons (Ryley wants me to include loons, apparently they are novel to him), mice :/, and squirrels and chipmunks galore. A squirrel scared me today in fact – rummaging around under the footboards of the privy. Also – things we’ve heard lots of but haven’t seen include owls, coyotes, loons, cicadas, songbirds, crickets, and whatever make the weird dolphin/goat noises at night (probably also crickets). Apparently bobcats aren’t uncommon but we haven’t seen one, and there are wild ponies in Virginia that we’ll hopefully be seeing soon!

One Response to Day 81