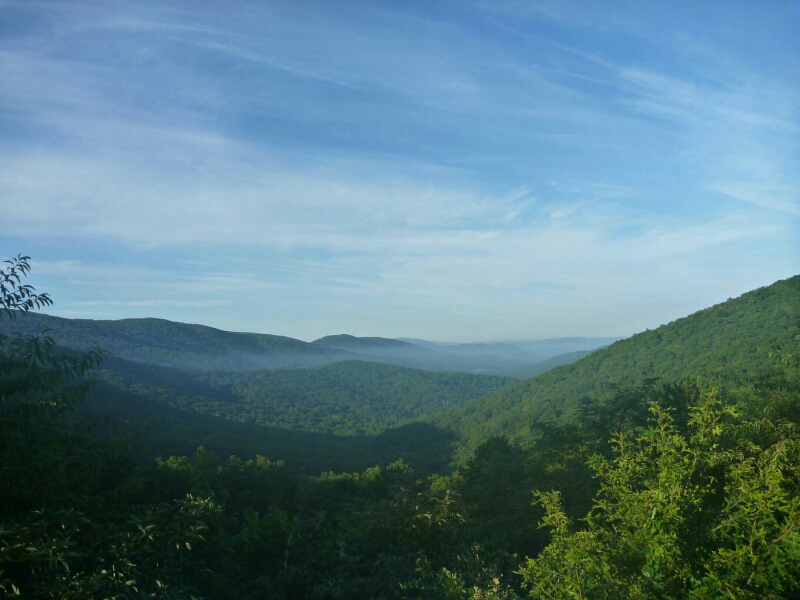 Hiking just after 7am with 12 miles to go till Waynesboro and an afternoon off and resupply. We hiked over calf mountain (no view), little calf mountain (with a view) and up and down about 4 “gaps” to cross the road. We saw some cyclists heading down Skyline Drive and decided that seems like a nice way to visit the park. Skyline Drive is 104 mile paved road that winds from end to end of Shenandoah National Park. Apparently in the fall when the leaves change it can actually get backed up – very popular.

The last few miles down to Rockfish Gap (our exit to Waynesboro) were kind of rocky and tedious, so we were glad to pop out around noon and call our ride to the hostel. We were picked up by a fill-in driver – a lively coot who just said his name was “truck”. He drove us to the hostel and gave us a quick run down of town.

We arrived to a deserted hostel so let ourselves in, found a Coke in the fridge, a shower, put a load of laundry in and vegged in the cool basement for a bit to mentally prepare for a hot walk to the grocery store about 1/2 mile. Not one sidewalk in the residential area and no pedestrian crossing at the lights to cross the 4 Lane highway – we just had to kind of time it and wing it. We decided this was a new low for impeding walking and increasing physical inactivity. I was unimpressed.

Back at the hostel we had a surprise – Brown! We had met Brown in the 100 Mile wilderness in Maine but hadn’t seen him since Monson, 9 days into our hike. It was awesome to spend the afternoon exchanging stories about the trail, towns, food, storms, interesting characters we’ve both met, and to get updates on some other SOBO’s we haven’t seen in a long time – Aussie, Vanilla Thunder and A-Town, Robin, Banner, Rabbi, etc! Ryley got a new, cooler hiking shirt in the mail along with new boxers. We were also joined by another guest for the night, Emil. Ryley said “oh, you’re French Canadian!” and Emil said “not French Canadian, I am Quebecois”. Haha. Really nice guy who is doing a section hike of Shenandoah NP heading north. He has food for 10 days – his pack was really really heavy!

I got a chance to make some phone calls and catch up with some friends and hear some highlights from Canadian Ultimate Championships (which were in Winnipeg this year). Went to bed a bit late but nice to hear from home. 🙂

Ben and Jerry’s blog
Ryley: Half Baked
Megan: Karamel Sutra (not my favourite)

DBB
This is probably embarrassing and shouldn’t be included – we shared a Yeungling Light (supplied from the hostel for $2) while I gave Ryley another haircut. Not very good.