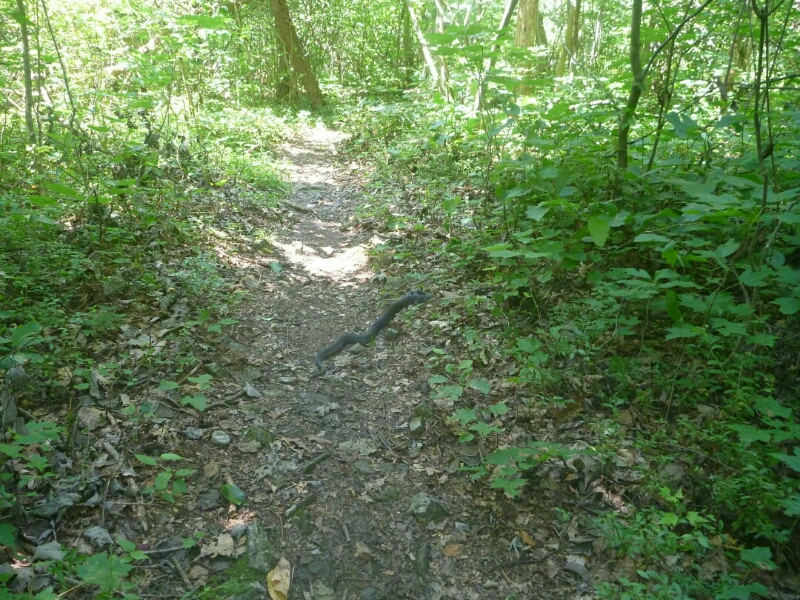 Today we had a resupply planned so we got up early and we’re hiking by 7. We did hit patches of “Pennsylvania rocks!” but again it was intermittent and some fairly easy walking in between. More up and down today – we had a 1000ft climb to start the day and another after our resupply. We hiked about 12 miles by 11ish and stopped for an early lunch. About 2 minutes after getting back on the trail after lunch, I was walking and staring intently at my feet to avoid tripping on rocks and was startled by another big snake on the trail. Not a rattlesnake but also not moving! One more step and I think I would’ve stepped on it! It flattened it’s head to look bigger and hissed at us then slowly  slid off trail.

We had another few miles down into Fort Clinton. I was being pessimistic about hitch-hiking the 1.5 miles into Hamburg where we needed to buy groceries – partly because of our failed hitching in Wind Gap, partly because it was a busy and fast moving highway. But, Ryley insisted we at least try and we were picked up less than 10 minutes later by an ex-hiker and his son. Sweet! Also, Ryley wins this round.

Our resupply was a grocery Wal-Mart – not glamorous, but pretty cheap and close to the trail. And, they sell Ben and Jerry’s. So after purchasing our groceries we sat in Wal-Mart on a bench in the air conditioning and each ate a pint of ice cream. I thought it was an uncomfortable place to look homeless and eat ice cream in public (a kid sitting in a buggy literally stared us down with her mouth nomming the side of the shopping cart…) but Ryley was blissfully happy with his peanut butter core ice cream and happily people-watched.

We stuck a thumb out on the busy, fast highway to try to get back to Fort Clinton and got a ride from and Audi who aggressively switched lanes and kind of cut someone off to pick us up. We dropped in at Frank the barber’s – apparently a must-see hiker place. He had a few hiker’s shooting the breeze in his cool shop while he was giving his $8 haircuts. Once he knew we were Canadian he asked if we’d met Redfeather – he had an autographed note from her, framed, on the table – one of the few places she told people about herself, I guess! We met Seabiscuit – a NOBO who started June 15! And needs to finish by sept to go back to school. He’s flying! He warned us we were in for a “gnarly” climb (it was steep but only about 20 minutes back up to the ridge…). 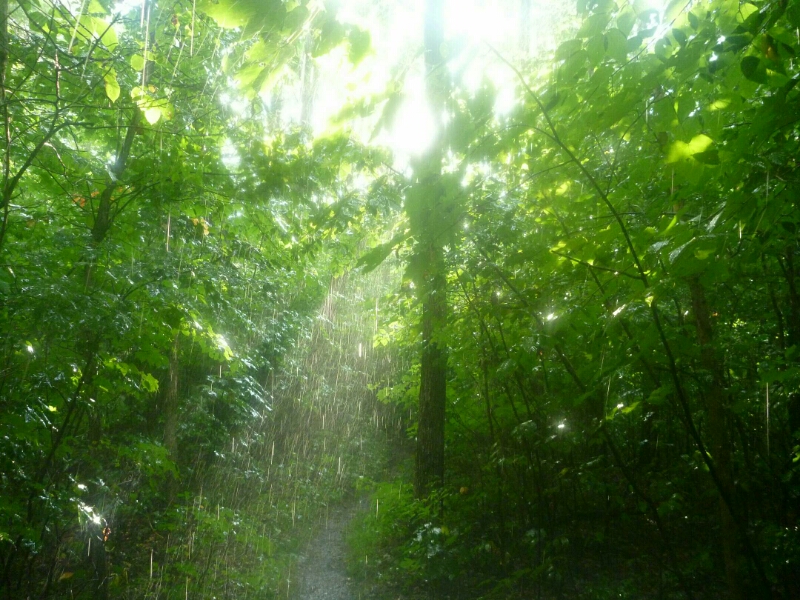 We were marching along on some nice trail when we got soaked by 3 hard rain showers. It felt kind of nice, actually, but didn’t really break the humidity – and also soaked our shoes which is never awesome. We also saw 1/2 a tree fall down randomly 20m in front of us on the trail, and got stared down by a giant frog in the middle of the trail who was NOT about to give up his little piece of trail heaven (I guess). We got to the next shelter and set up our tent, wrung a lot of water out of our clothing, and had dinner with some northbounders at the shelter, exchanging news about upcoming water sources (pretty important topic these days as it’s mostly been dry and a lot of the water sources aren’t reliable mid-late summer). Then a big thunder and lightning storm came through and soaked everything one more time. We got into the tent for it but got sprayed with water from the inside… Ah well. Weren’t we just complaining it’s been too hot??