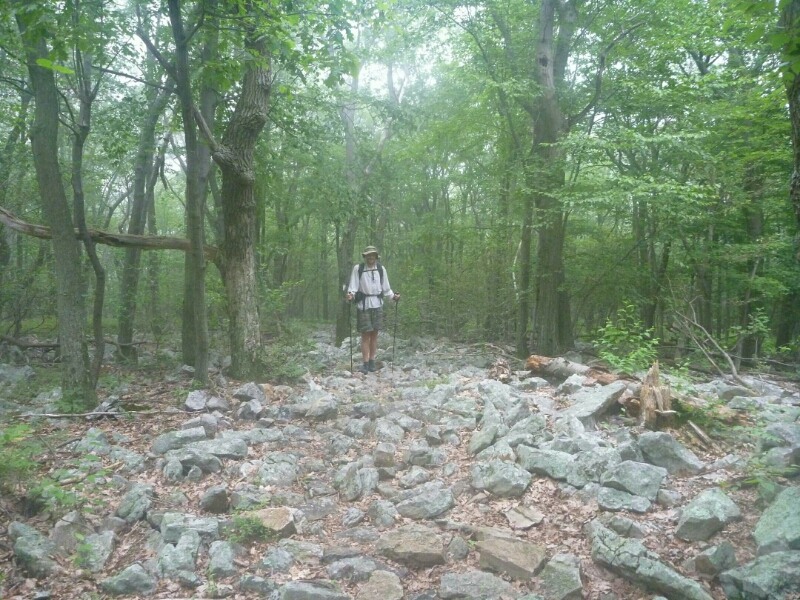 Another sub-par sleep and up and on the trail by 7:40. Because of the long day yesterday we only had 9 miles to walk into Wind Gap, PA – our destination for today and tomorrow! We’ve been waiting for the “rocks of Pennsylvania” to hit hard – their reputation precedes them! We’ve heard people warn us that our feet were going to fall off, that unless we got boots with hard soles we wouldn’t make it through, that our feet won’t stop killing us for hundreds of miles after PA… We’ve heard more reasonable accounts of PA – that it is rocky but only for the North 1/2, and that as long as we’re prepared for a slower pace and lots of rock hopping and maneuvering with some sore feet, we’ll survive, feet intact. As usual, we are taking dire warnings with a grain of salt but willing to be pessimistic – so we can be pleasantly surprised if it’s nicer than expected.

The first 6 miles last night weren’t bad but we now know what the PA rocky trail is like! Fun? Tedious. Sharp. (We went through a section called “wolf rocks”.) But, so far, intermittent. We’re hoping that keeps up but only time will tell.

We were glad it was overcast this morning (it was very slightly cooler) but for some reason that meant that the deerflies were vicious this morning! Circling and trying to get a chunk out of  us at every chance. We killed a couple – two-hit kills! You could see the outline of my hand from murdering one of them against my leg.

We tried to hitch into town but no dice so we walked 2 miles into the diner for late breakfast then another mile to our hotel. Sigh. At the Red Carpet Inn we were offered a smoking room with window, or a non-smoking room with no window. We don’t think it’s legal, but it smells good so now we just have no idea of it’s daylight outside or not! We walked back into town to get dinner groceries so we can just veg for the rest of the day and tomorrow – then, we began to veg in earnest! Watched TV and The Fast and the Furious 6 (amazingly awful), and streamed the All-Star vs Riot game (ultimate). And ate a bunch of foods. 😀