Last night we were treated to much rain, and also my sleeping pad springing a slow leak. I had to blow it up every couple hours all night, resulting in little sleep. We did get moving pretty early, though, and the rain had stopped which always makes breaking camp better. 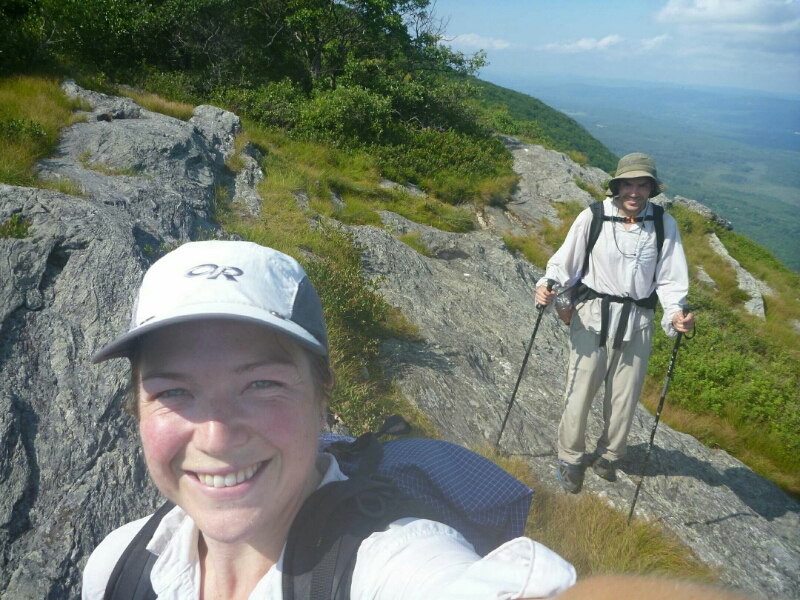 Our camp was up on a bit of a ridge, and we followed that out of camp, up in the clouds and passing what was likely nice views. Then we dropped down into the Housatonic River valley and had to cross to the other side, about 7 miles away. Unfortunately, the whole valley was rife with mosquitoes so we just flew across as fast as possible. Towards the end of the crossing, it started raining hard again which eased the bug problem 🙂

We climbed out of the valley finally via some pretty steep trail up another ridge. We followed that ridge for the rest of the day, going over 3 mountains and crossing into Connecticut. The clouds and rain cleared while we were doing this and we had some nice miles of ridge walk with views back across the valley. I was pretty tired but Megan pushed us 23 miles so we could have a short day tomorrow into Salisbury, CT, our next resupply.

We had dinner at a shelter and setup our tent, and then thunderstorms rolled in, catching Megan up at the shelter while I was in the tent. She ended up hanging out with the people there for an hour waiting for a break in the rain to zip over to the tent.

Mk: We did see Redfeather’s entry – she’d seen a Bobcat on the trail in May! Keeping my eyes peeled tomorrow…but not expecting a repeat.

One Response to Day 44 – Connecticut