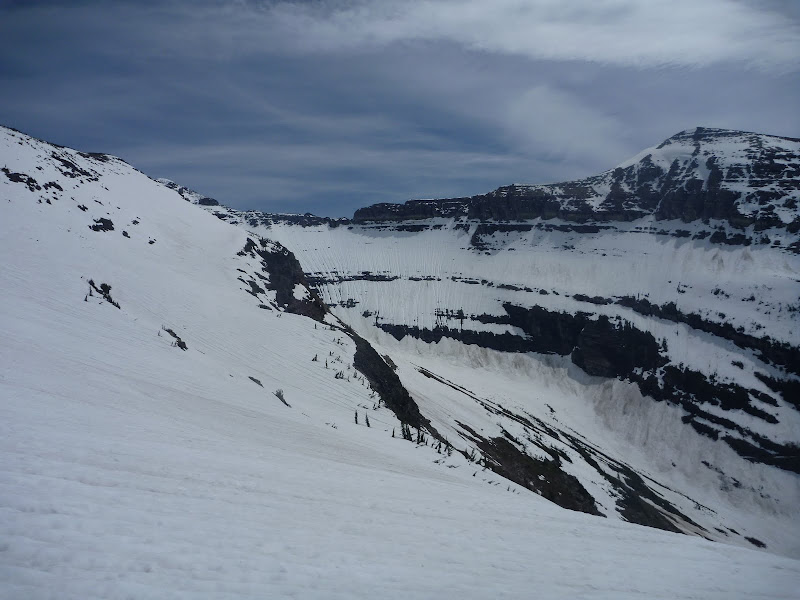 Crazy day, more of a slog than yesterday.

I slept OK even though it was below freezing – by the way, my Montbell ExLight Jacket is insanely warm. We started out with a traverse on snow that was fine but slow, but at one point I came around a tree corner and surprised a mommy grizzly and two cubs. I can’t say exactly what I did, but I ended up side by side with Chance with both our bear maces out while the mother charged towards us. Fortunately, once she got a good look at us, she took off. I think somewhere in there I screamed at Chance, “what do we do??!?!”. No answer. Oh well, we were pretty nervous after that!

Soon after we strayed too high and got stuck over cliffs looking at Cattle Queen Creek’s basin. While we were up there we could see the trail traversing high, with 45 degree snow banks burying the whole thing. In the distance we could see the infamous Ahren Drift and it didn’t look good either. We decided to back up and find the trail below us and traverse with it into the basin to take a closer look. We scared a black bear off somewhere in here too. 4 more bears that I saw on the whole PCT! I could have done without it 🙂

Once we were in the Cattle Queen Basin we realized our best move was to traverse around both hazards at 5600 feet and then climb back up to the trail after that. Chance was already tired at this point and we were at best half done. Our traverse went fine until we got to Ahren Creek, where the steep sides of the valley forced us to cross at a less than ideal spot. We had a good snow bridge but the far side we had to climb up an incredibly steep slope. I resorted multiple times to just jamming my hands into the dirt and praying they’d hold me up. Chance was completely exhausted by the climb and we decided we probably wouldn’t make it to our designated campsite.

We painfully climbed back up to 6800 feet then had dinner and got a last spurt of energy. We crossed one last snow field to some promising trees, hoping they would keep us out of the wind. Chance is in a tree well with his tarp over top. My Tarptent is not so flexible, but I did the best I could to protect myself from the wind.

We had great, hot weather all day… It was kinda sad though that we lacked water a lot because we were on snow mostly and not wanting to stop to melt snow. I had a lot of trouble choking down all my food, but managed… Only gagged a few times 🙂

Tomorrow we’ll have to make up a couple missed miles and then head into Many Glaciers. Chance is already talking zero day – he took twice as many as I did on the PCT, and I had thought I took way too many!

Once again well past hiker midnight so good night to all.