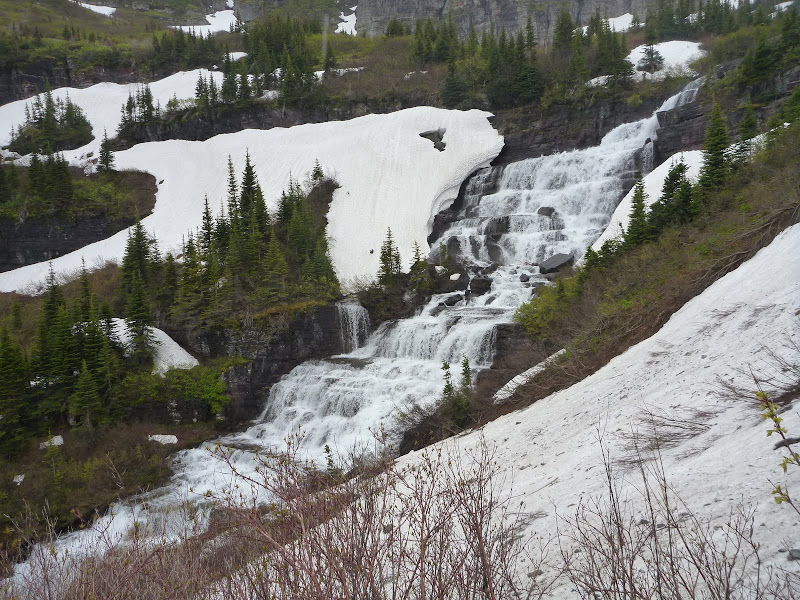 Slept long last night and got moving by 9am. We had a nice quick 3 miles to the head of Glenn’s Lake and then quickly ran into a bunch of steep snow slopes as it started raining. It was really cold but the cloud cover was high enough that we could still see the mountains around us.

Chance showed off his snow traversal skills while I was quite a bit more timid. We switched to ice axes and pretty quickly put on crampons. I felt way more confident at that point and enjoyed the rest of the day a lot more. Chance had spent two weeks on snow continuously in the Sierras on the PCT, so he had tons of experience at moving through the rugged terrain we found.

As we climbed towards Stoney Indian Pass we went beside some beautiful falls, probably as large as they get in the year due to the amount of snow melt. We had a very abbreviated lunch due to the rain, snow and cold then pressed on to the pass. We started following some MASSIVE grizzly tracks on the final climb up, and the all the way down the other side. Whenever we strayed from them we got in trouble.

Eventually we descended below the snow and into lush spring again. The flowers were blooming right on the trail and the sun came out. We had not made many miles at this point, 11.4 over 7 hours, but we were already beat. We stopped for an early dinner and dried out gear while studying the maps. I realized, to our horror, we had to climb another 2500 feet to our camp site at Fifty Mountains, another 5.6 miles onward. This is what happens when rangers let you make your own itinerary, which we did on the spot in about 5 minutes. Great planning…..

Anyways, the climb was hot and hard and then we hit continuous snow again around 6000 feet. So we slowed down and started counting hours, realizing that we’d be getting to camp around dark. Chance was slowing down after breaking trail most of the day, so I led the last parts. Every 100 feet up brought better and better views of the mountains around us. Stunning. We eventually GPSd our way into “camp” on snow behind some trees. We are in the right place because we found the top foot of the outhouse buried in the snow nearby.

We’re in for a cool night but at least so far it isn’t too windy.

There wasn’t much time for thinking today. It was a mental challenge pretty much continuously to keep track of where we were. We passed one set of tracks today and didn’t see a soul. Beautiful. This is how I imagined I would see the Sierras but in 2007 they were already clear of snow by the time I walked through.

It’s well past hiker midnight aka 9pm so time for lights out.