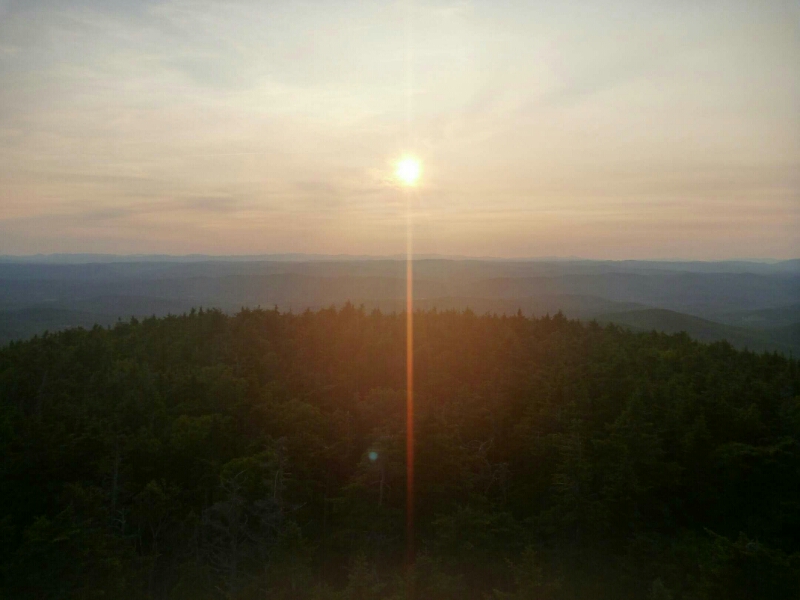 View from the fire tower

We were woken up to a neighbour of the hotel’s powersawing before 7am this morning…when in Glencliffe, I guess?

An easier day, finally! We still climbed some mountains, but the sun was shining and the slopes gentle.  We covered 10 miles by lunch and took a break by a kids camp, where a nice couple found us and peppered us with thru hiking questions.  After lunch we climbed the mountains, but the trail was still smooth, so we were happy.

We are camped by a fire tower with beautiful views all around from the top of it.  We also met some nice northbounders who gave us a few extra guide book pages we are missing. They also suggested we’ve done 80% of the hardest parts of the AT already… Sounds nice!

Mk: on the hike this morning we passed a group of kids and a few chaperones. The kids were around age 10 I think? And said they were at a camp (turns out we were near a road so they’d walked into the trail from there). I guess Ryley put his head down and motored past them, but when I was walking up to them they started asking me questions…
“Where did you come from?”
Today, or, originally?
“Originally”.
I hiked here from Mt Katahdin in Maine. “Whoaaaaa. How long did that take? How far have you hiked?”
It took about 4 weeks, and it’s been about 400 miles so far.
“Whoaaaaa. Where do you sleep? Are you carrying everything you own? Are you CARRYING A TENT?!? Is it as muddy where you just hiked as where we just came from? How come your backpack looks so small?”
There were more but my personal favourite was: “Do you have any other clothes?”
Um, no, not really.
“Oh.”
And last but not least,
“Are you going to finish TODAY?!”
Um, also no…
Haha then their chaperones urged then to get going (and thanked me for taking the time to talk to the kids). Pretty cute and definitely made my day!

One Response to Day 29