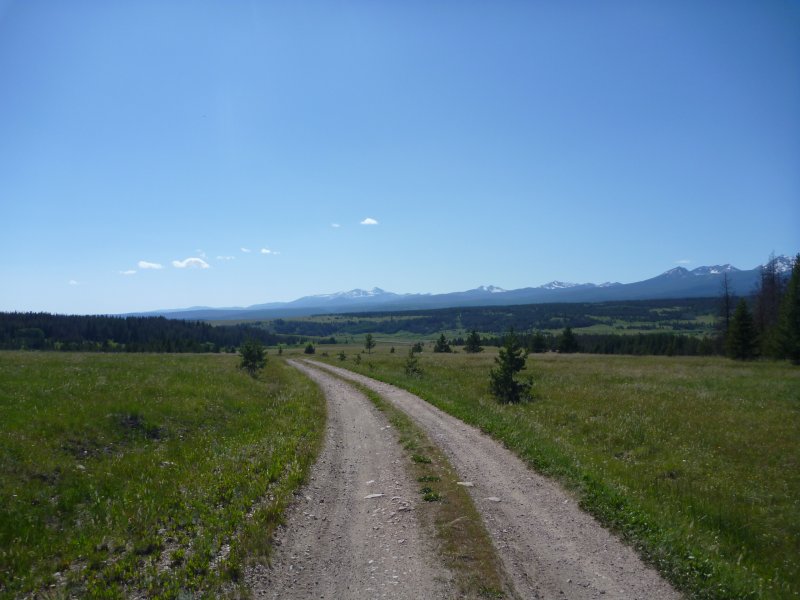 Today was mostly one big climb up Burnt Mountain and then tons of descent.

When researching for this trip, I read about some CDT specific.. ahh, logistical concepts or “specials”. We had so far avoided then, but no longer.
The first was that our two data sources seriously not agreeing about how far things are apart in miles. According to our feet, neither was correct. Usually we’ve agreed with Ley (the map maker). Today he said it took us 5 hours to do 10 relatively easy miles. Based on my normal pace, that should take about 3 hours and 20 minutes. Anyways, it doesn’t really matter except that we only bring so much food. If this happens a couple more times we will end up hungry coming into town.

The second CDT “special” is that the trail is supposed to be hard to follow. Our only navigational issues have been snow related. Apart from that, the trail has been ridiculously well signed… until today. Once we entered the Mt Haggin Wilderness Area, it seems the State of Montana decided not to maintain or sign the CDT. We missed one turn, quickly figured it out, and have been on guard since. Still, according to CDT trail guides, you should be “misplaced” regularly, and I can safely say that we have barely known exactly where we were since lunch.

Finally, the CDT is incomplete, and that shows up as us having to walk a lot of roads sometimes. Today was 100% road (except when we were misplaced and bushwhacking). This is hard on the feet and the mind.

To top it off, as we were starting to look for camping spots, we ran into a bunch of barbwire fenced off private property. We ended up hiking an extra hour just to find a spot off the road a bit (probably still private property though).

Anyways, to end on a happier note, tomorrow we enter the Anaconda-Pintler Wilderness. Judging by the views we had today, it will be spectacular. Also, we are going to sleep to the sounds of cows mating. I had no idea cows made any other noises than “moo”.