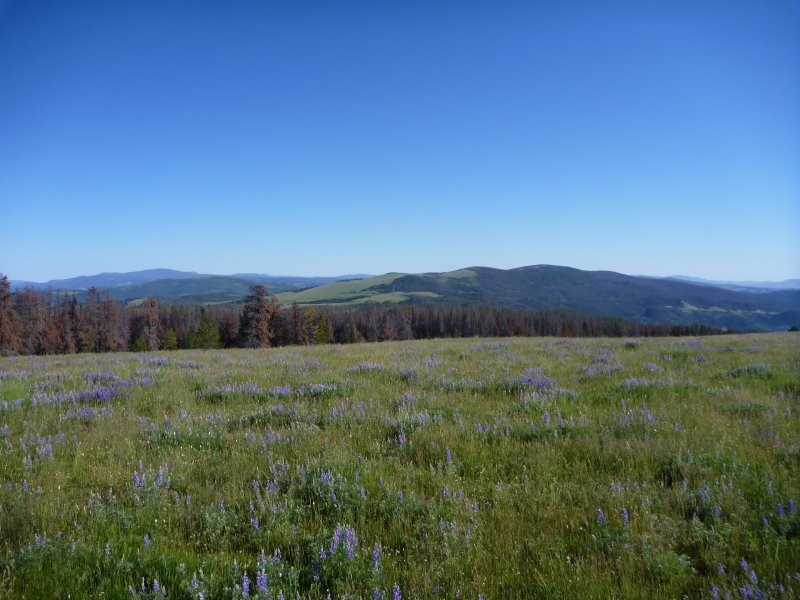 We thought we had gotten far away enough from the highway last night that civilization wouldn’t bother us… So wrong! There was a big antenna nearby and at 10pm its giant lighthouse turned on and started strobing us every 3 seconds. Normally these things just have a red light on top, but the engineers went a bit overboard here. Anyways, I slept fine once I figured out it wasn’t a prison break or Chance sending me SOSs on his headlamp.

I was woken up by the sun warming my feet, and unusually Chance wasn’t already up (he takes ~30 minutes longer than me to get moving most mornings). I called out to him… No answer. I looked over and he was fully. In the sun, but bandana over the eyes and ear plugs had let him sleep obliviously.

We eventually got rolling and had some easy miles on flat trails and forest service roads. In fact that was true all day. The day got hotter and hotter as it went along. Chance had checked the forecast, and it was 110F for Helena. Using my handy Fahrenheit to Celsius converter (in my head), I realized the three digit temps qualify as “too hot to measure”. We both did fine since we have all our desert gear from the PCT.

We ran into a couple Forest Service people out removing blowdowns from the trail. They had seen another CDT hiker, so probably ET is just ahead of us. They were surprised we weren’t sweating much, because they were drenched. My observation was that if you wear steel toed boots, jeans and a cotton tee, carry a chainsaw and a sledge, you’re gonna be hot! As an aside, I’m not sure there’s anything much cuter than a girl with a chainsaw over her shoulder (except my girlfriend of course… haha).

At lunch I finally got to try out my new Kindle. Not broken yet! Later, we had trouble finding a spot for dinner that wasn’t swarming with bugs… We failed. I actually ate a few because they would fly in with my spoon. Hopefully mosquito season passes soon. Overall we had a nice day, we’re camped right at the foot of Thunderbolt Mountain, which we go right over tomorrow. Coincidentally, the forecast for tomorrow is thundershowers.

Sweet dreams for me.