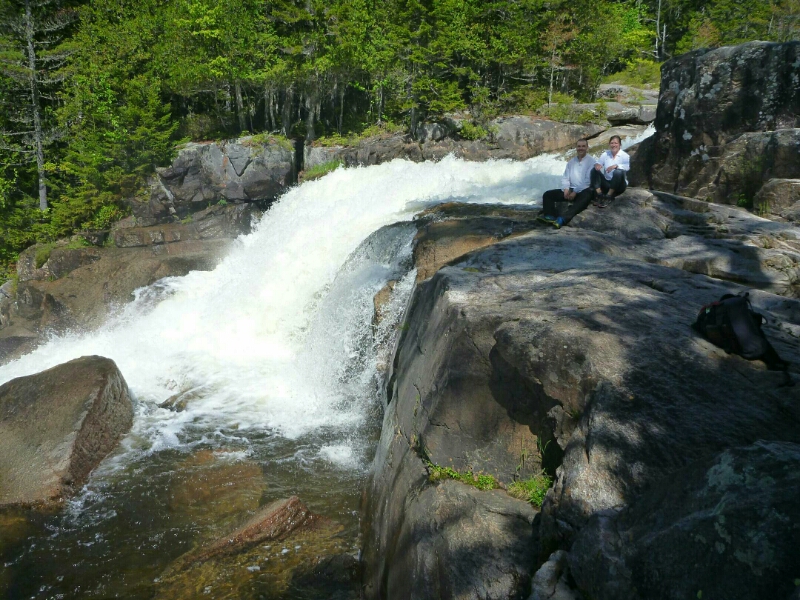 Our first full day on the trail started with a big rain storm overnight that bounced drops off the ground a foot up the mesh of our tent and got us a bit wet and sandy. Fortunately the day dawned sunny so we were able to pack up carefully and mostly keep the sandy mess of tent contained.

The majority of the morning was blessedly flat and decent trail until we got to the first river ford.  We took a careful look around and decided to go around on a detour that completely avoided the river.   On the AT there are white blazed trees quite often to let you know you’re on the right trail.  When you get on a side trail like this one, it has blue blazes instead.  Traditionally you’re supposed to only hike the official trail but our hike will be more about connecting steps from Maine to Georgia than following the exact “correct” route.

Anyways we ran into Pete again about 3 times as we hurried past him then took breaks.  We also met a guy hiking in an America t-shirt named Dan, along with 4 guys calling themselves the Ninja Turtles.  We had actually seen then on top of Katadhin but hadn’t realized they were thru hikers.

We had our last taste of civilization for awhile in Abol Bridge, where we had a sandwich and Coke, then headed into the 100 Mile Wilderness.  Which means it’ll be 8 or so days before we get out to another town.  The first shelter in the Wilderness had a logbook and there was an entry from yesterday written by Vocal, a hilarious gentleman I met in Montana in 2011 while hiking the Continental Divide.  I hope we catch up to him at some point.

Once again we are pretty tired from lack of sleep. The rain kept us up last night as we assessed how wet we were getting, so another early night is called for!