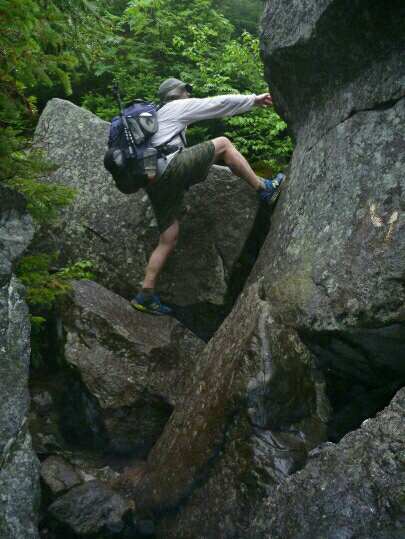 Climbing in the Notch

We woke up early today due to rain starting and our neighbours leaving.  We climbed Baldpate in driving rain, and after we summited and were descending, we actually had rain being blow up the mountain at us. It was gross and kind of sharp! and we got very wet. Fortunately, once we got below the trees, things calmed down and we had a nice stroll down to Grafton Notch.  There, I used a picnic table to perform surgery on my trekking pole and replace its tip. Then, I found some delicious trail magic in the form of a cooler full of Cokes!

I powered up Old Speck on that soda, then the trail started to get ugly. It was very wet and slippery coming down and I fell pretty badly, deeply gashing my shin, which it turns out doesn’t bleed much, but does look pretty gross.  This was the worst section of trail yet, and it soon got worse as we entered the Mahoosuc Notch, which has a justified reputation as the hardest mile on the trail.  We climbed over and under giant boulders, trying not to slip on their slick sides. The trail is poorly marked and hard to follow as it often goes through very tight spaces. I had to take my pack off to squeeze through some spots, and we generally just went really slowly to avoid injury.  Unfortunately, I still managed to have my hand slip off a wet hold, sending me crashing down some rocks.  I magically landed on my pack though, thus mostly wounding my pride, and some bloody little cuts on my fingers. 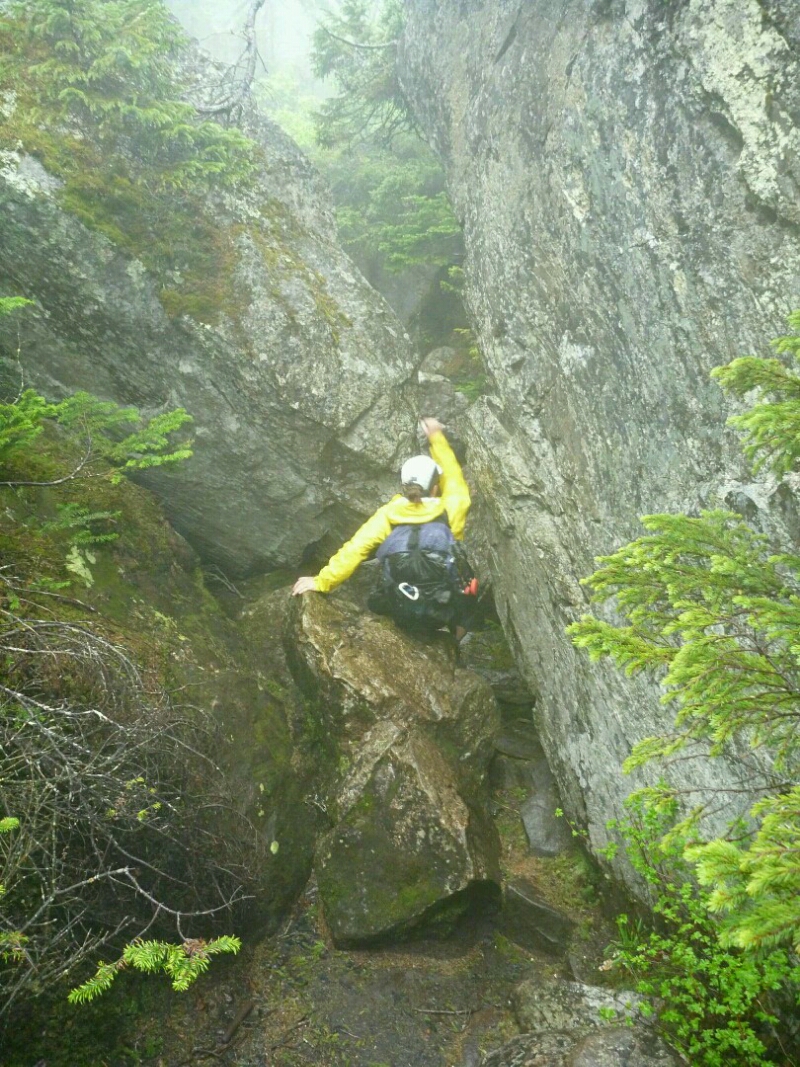 Megan crawling through a tiny gap

Megan was totally fine this whole time too, which really made me look bad 🙂  She was actually having fun, as there were parts of the Notch that must never get sun, because they had snow in them! There are weird air currents down there, sometimes it was freezing, some times warm, very spooky.

We finally hacked our way out of the Notch and climbed up out of of the fog into a nicer day, except for the rumbling of thunder which chased us the last mile to a shelter, which we wisely decided to stay in. Within minutes, the sky opened up and it poured, but we were able to watch it high and dry.

Overall, we put in 11 hours of hiking to go 15 miles, including over 1.5 hours in the 1 mile of Mahoosuc Notch alone.  We are tired but pretty happy with ourselves for getting it done!