We got up today to solve the mystery of Megan’s pants – they had been ordered and delivered to Andover, but not, as expected to our hostel. Instead, someone named L. Shirey had signed for the package… But in a town of 400, by asking a few people, we were fairly sure this person wasn’t a resident of Andover.  After all that build up, it turns out that the pants company had screwed up and FedEx’ed the package to General Delivery (a nono that Megan had explicitly told them not to do). Normally that would result in the package sitting at the local depot, in this case many towns away, but the FedEx driver was nice enough to take it to the Post Office, and Lee, the lovely lady who works there, signed for it. Mystery solved, and if only the pants had fit, the story would have a happy ending. They didn’t, and she sent them back. The pants saga continues…

So, we got to the trail at 11 o’clock, and climbed some more mountains! We missed a morning thunderstorm too and we were hiking in the sun.  The trail had some character today, with a couple miles of river trail that we splashed through, but also a couple more of welcome, smooth, knee-saving descent. 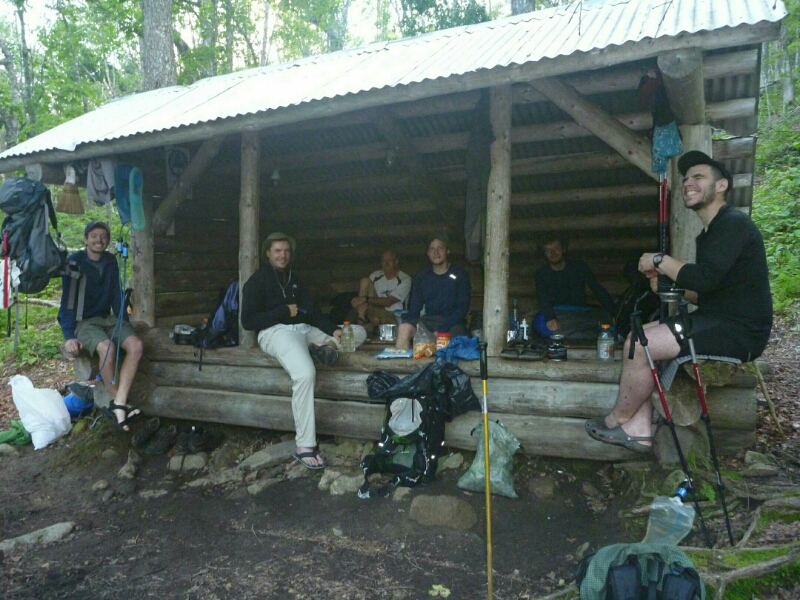 We ended up just shy of a big mountain at a shelter with the usual crew plus Dr.  Banner and Rabbi. They have been telling us of some sort of massive storm coming tonight and/or tomorrow. We have storm-proofed our tent (if you saw our tent you would laugh at this statement – “storm proofing” basically includes pulling up the sides of the tarp footprint a bit so there isn’t quite so close to the mesh wall, and putting Megan’s rain jacket up against the uphill side she was sleeping on where we expected the most water might get in) as much as possible, so hopefully it goes well (probably not).

Thanks for all the comments and well wishes, they are much appreciated.

One Response to Day 18