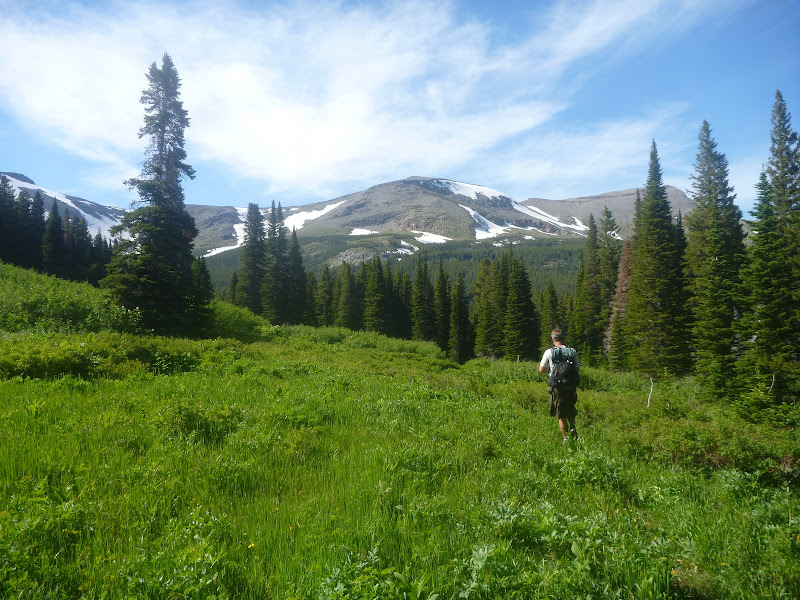 Last night I barely slept due to mozzys buzzing around me in the hostel, and it was too hot to zip into my bag, so I mostly just got bit. Also there are tons of firecrackers going off as it was the night before the 4th of July.

We spent the morning doing errands, then split a pint of ice cream to prep for “slack packing” the hike. The plan was to leave most of our gear in the hostel, hitch to Marias Pass and then walk back. We spent 30 minutes trying to hitch until some State police came and told us to stop… Dispirited, we bought some beers and headed back to the hostel. During our first beer, we were complaining to an older guy staying there too that we were unable to get a ride, and he offered to take us!

We finished our beers and headed out. The trail was a bit hard to find the start of, but once we got rolling it was easy times. The bugs were horrendous though so we didn’t stop for 4 hours straight. We finally took a break and did the “get your jacket and bug net on as fast as possible” dance.

Not the most enjoyable walk overall, mostly just in a tunnel of trees. When we got back to the hostel more CDT hikers had arrived! Liv and Travis were there, and a guy named ET walked in right behind us. ET was super quiet so I didn’t get much of an impression, but the other two were entertaining. We drank our beers and listened to the 4th of July festivities.

Oh yeah, I called Amazon about my busted Kindle and they are sending me a replacement to Lincoln, MT, where I’ll be in a week and a half. Good times!