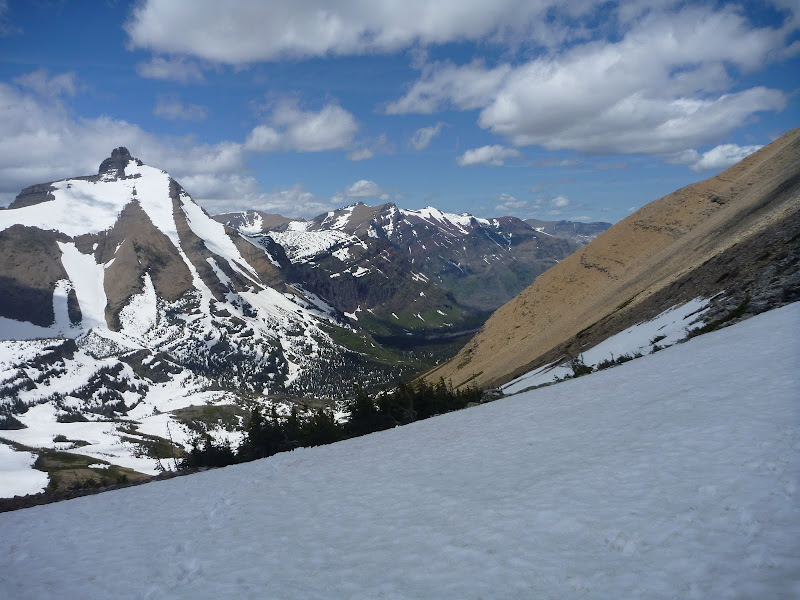 Nice night, slept really well, we didn’t get up too early either. It looked to be an easy morning until we got to the first river crossing and the bridge was missing! We looked at the map and determined that the trail crossed over and back a mile later, so our first thought was just to bushwhack to where it came back. Then we weren’t even sure which river we were at, so Chance just decided to ford it. He had a lot more experience fording big streams so I watched… As he made it about half way then came back. The stream was too strong at that point.

Plan B ended up having a different stream crossing, which we managed shimmying over a slimy log right below some waterfalls. We eventually got back on trail and the rest of the way up to Triple Divide Pass went easily. Lots of snow, but mostly in the right places.

Triple Divide Pass is called that because waters flow from it’s slopes to 3 different oceans (I have no idea which ones). We started coming down with another long slowly descending traverse. It had lots of snow patches that slowed us down until we got frustrated and just glissaded down to the bottom and picked up a handy trail going the right way.

We met our first backpackers since Day 1 AND we are sharing a campground with them (a first). We actually saw them walking on the trail earlier and I got all excited – I ran up to them shouting “look, people!!!”. They were actually quite understanding and nice, even offering to share their dinner with us. They also had a frisbee, which sealed their place in my heart.