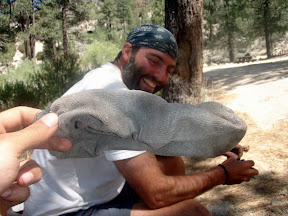 I went through a ridiculous number of socks on the Pacific Crest Trail.  Sometimes two pairs a week, completely shredded by my dirty feet and too many miles.  In the deserts of Southern California, the sand and my sweat combined for the socky horror show.  In that picture, I was so tired, I couldn’t puzzle out what was wrong with my sock, so I was asking Tony about it. He was amused. I actually used 18 pairs of socks to get through half of California.  They were all Wright Double Socks, which are basically two pairs of thin nylon socks stitched together.  I finally got wise and switched over to a nylon/wool blend sock from Smartwool, and I found those lasted a bit longer – over a week per pair!  Anyways, the “Gear” aspect of socks isn’t really important.

I’ve discovered that I’m going to get blisters no matter what, but that after a few weeks of hiking, I’ll stop getting them.  Socks at that point don’t really seem to be doing much, my feet are essentially rocks.  I tended to carry only one or two pairs, and just wear them until they were destroyed.  I occasionally washed them out on the trail, but realistically all my clothes got laundered at most once a week, and usually more like every two weeks.

Hiking poles, these are my knee savers, my ankle braces, and my tent poles.  I don’t really have any ankle problems, but I’ve found that hiking poles keep me well balanced.  Going downhill they keep my knees happy.  Going uphill they take a bit of strain off my thighs.  For the CDT, I have splurged and bought carbon fiber poles made by Gossamer Gear.  They are pretty ridiculously light, and I’m looking forward to not noticing them at all while I hike 🙂

Finally, boxers.  I don’t have any pictures, but I’ll just say this – I prefer to have air flow under my shorts.  I think (maybe right, maybe wrong) that avoiding chafing is the chief function of my underwear, and that boxers do the best job of that.  Also, given that I don’t carry more than 1 pair at a time, I like to pretend that boxers are somehow cleaner.  Try not to think about it.

Staff members at BPKMemorial Hospital Hospice are designing and teaching classes for nurses and physicians who are coming from all over Nepal to learn more about palliative care.

This entry was posted in CDT, Gear. Bookmark the permalink.