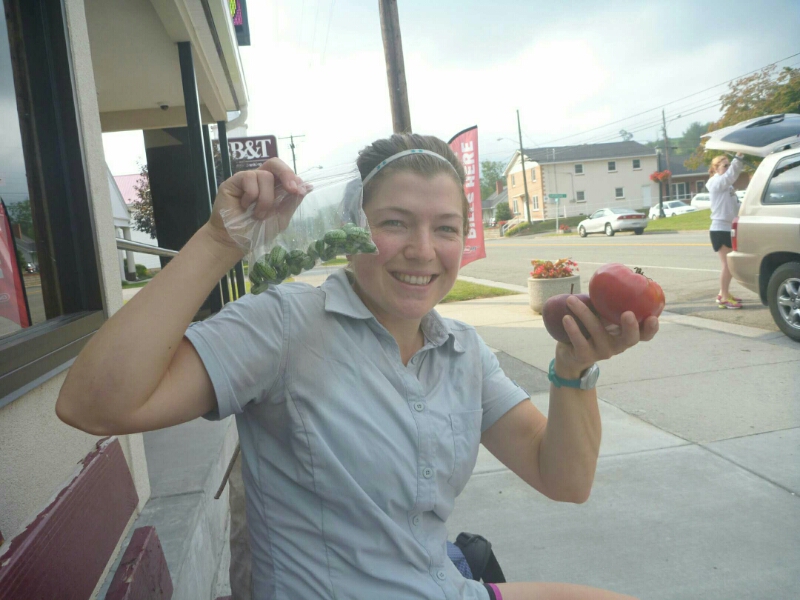 We hiked down from the shelter to an access road, along it over an interstate and up to highest 52 where we hitched into Bland. We were dropped off at the Sunoco gas station – also the local eatery (promising…), which is a little kitchen/grill and dining area in the back. Saturday morning meant all you can eat buffet for $5.89. I opted to order French toast but Brown and Ryley had the AYCE (Ryley said it was better than the buffet breakfast last weekend at a real restaurant). Standards started pretty low, though 🙂 It was no waffle breakfast at Judy and Jimmy’s, that’s for sure! On the way to the grocery store we stopped to check out the farmer’s market with a selection of fresh local produce (hurray!) and also a gun and ammo trade set up. Ummmmm…..interesting? I told the gents there that farmer’s markets in Canada didn’t usually have a gun trade section… But I DID buy gherkins (miniature cucumbers but they look like dinosaur eggs? or mini watermelons?) and a tomato and was given a few apples. Amazing!!

After getting a couple days of groceries and stopping in at the post office we hitched back to the trail and headed onwards. Brown once again worked his magic – a pick up drive by but then u-turned to pick him (and us) up! We stopped for a late lunch around 2, where we met The Mule – a Nobo headed to Waynesboro to work for the winter then continue on next spring. A few miles later we stopped at a shelter to tank up on water for a long dry section where we knew we’d be stopping for the night. There was a long slog uphill after the shelter then rocky ridge walking. We didn’t find somewhere to set up camp until 6:30pm but we’re happy to have gotten 23 or so miles in even with the 3h break in town. Tomorrow looks like a lot of up and down – maybe we’ll get to see something, though?

One Response to Day 93