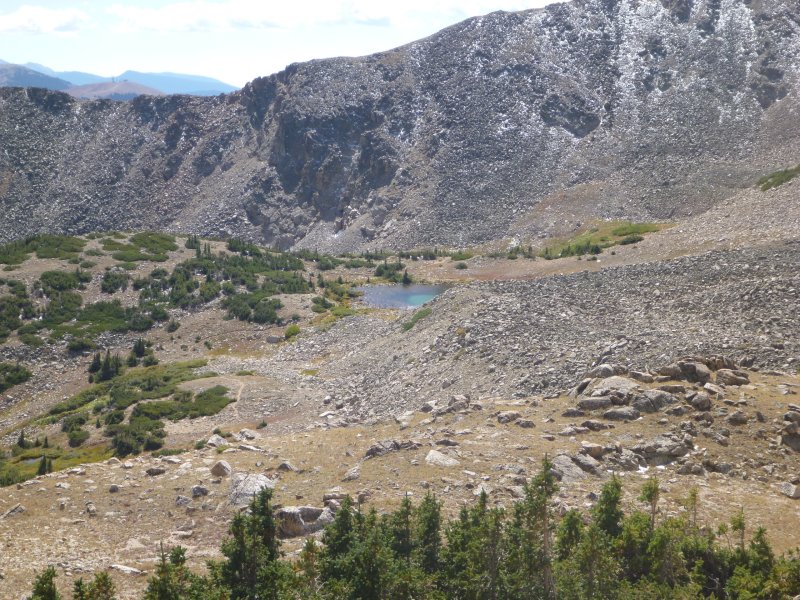 Another cold morning, this time though the sun didn’t find me until I had been hiking for two hours. I climbed up a pass then and out of a deep north-south valley and the sun instantly warmed me. I then had a long descent to a junction where I could go to the highway and head to town, or climb back up to the divide and loop to the same highway further up, in about twice the distance. I debated on the way down, that I was too tired, my legs too turned to mush to keep going up when town was right there. What did I have to prove by going the “hard” way?

My pro arguments were pretty lame – I had food that would be wasted, and maybe the views would be worth it (the cynical part of me certain that it would all be the same as what I had already seen in CO). When I hit the junction, I went the hard way and all I can say is that I’m wired to do things “right”. Or I’m too stubborn to take the easy way sometimes. That’s not as profound a reason as it could be, but seriously I don’t know why I do what I do sometimes.

It turned out well. I stopped for lunch high on the climb up to the divide. Marmots frolicked around me while I lounge in the sun reading my book (actually I think I was near their nest and they were mad). When I got up to the top, the loop was mostly on good trail with a bit of snow. I had great views that managed to be unique and interesting. Can’t complain 🙂

I eventually got back to the highway and quickly got a ride with an RV containing an older couple and their 20-something daughter, Tanya (?). By strange coincidence she had planned to do the CDT this year but had it derailed by some career stuff. They drove out of their way to drop me off at the post office in Salida. I got my box, checked in at the local hostel, then went out in search of Monday Night Football, beer, and food. I’ll probably take tomorrow off and let my legs recover a bit before heading back up into the mountains.