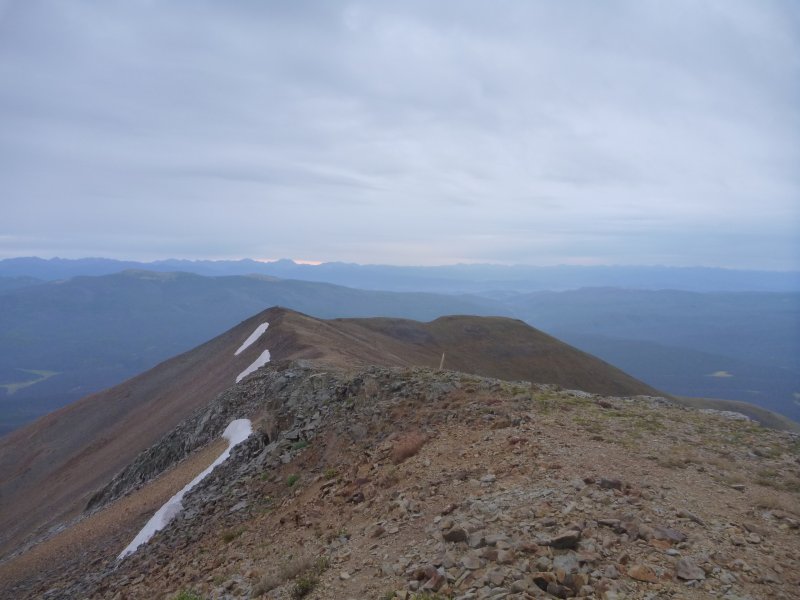 Well, staying on top of a big mountain was pretty, but at 4am a storm rolled in so I had to move into the hut… which turned out to be leaky, although only in parts (the other parts were covered in broken glass and mouse shit…mmm). I’d heard from people that have hiked the Appalachian Trail that the hut was actually very nice, so I guess your standards get to be quite low after that trail (if you don’t know – the AT has huts every 10-15 miles, so people tend to sleep in them every night while doing a thru-hike of that trail).

I was up with the sun, or so I assumed, because clouds were closing in on all sides. I hoofed it down the mountain as the rain picked up. Very cold that up that high. Unfortunately, there’s no trail down the mountain so I came out on some random road. I didn’t want to stop to figure out exactly where I was or where I was supposed to be going, as I would have frozen. Instead I just aimed downhill and ended up going far out of my way but oh well, stayed warm-ish.

It stayed really cold and rainy all morning, and my hands were suffering even in two pairs of gloves. Eventually I stopped for lunch and setup my tent to try to warm up. That turned into a 2 hour nap which finally warmed up my hands. After that, I moved as fast as I could to stay warm as it kept raining. I went over a pass from which I could have stayed high, but there wasn’t much point as it was totally fogged in. I took a lower alternative but it didn’t really go where I expected, so I ended up road walking into Grand Lake (my next resupply point).

Somewhere in there I broke one of my poles again, so I’m probably going to give up on these super light ones and get my old ones back. Too much money wasted on them considering my older Leki poles made it through the whole PCT without issue.