Last night ended with some epic thunderstorms that we watched from bed and felt shaking the whole church.

We got a ride from Tom, a guy associated with the hostel, around 10am back to the trailhead. Another hot day, the storms had done nothing to break the heat. We walked along some very long boardwalks through open swamps, stopping to admire some cute algae covered turtles. After that we walked around the perimeter of a bird preserve where we saw many interesting but unknown birds, but also Canadian Geese! And more turtles, this time right on the trail! 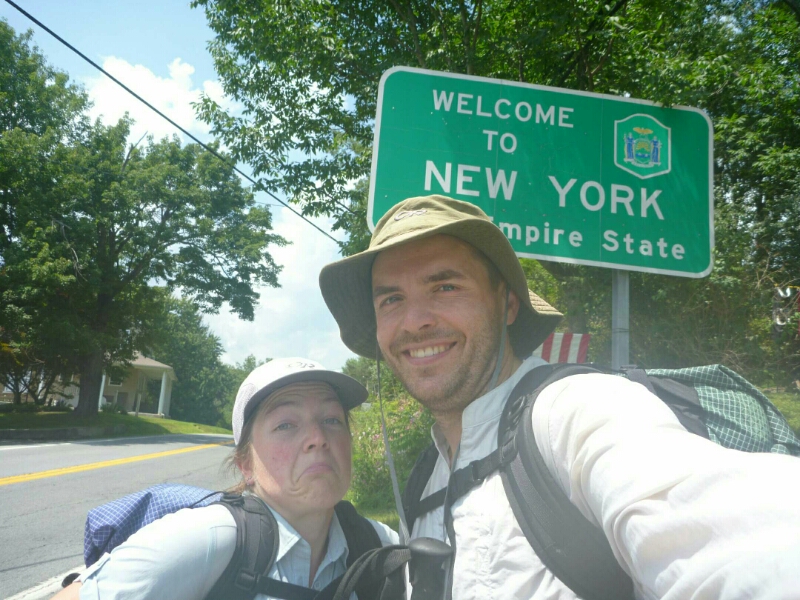 Brief dip back into NY

It was still blistering hot, so we decided to take an alternative route through a town so we could get a drink. As we walked through, we passed a bar with some hikers smoking on the porch who convinced us to come in. A few beers later, we stumbled back out into the heat, now certain that more beers from the general store were just what we needed. It was now 3pm and we hadn’t had lunch. We grabbed more beers and got back to the trail, finally sitting down for some much needed food… And beers.

While we ate, 3 southbounders went by!  That has happened so few times on this trip that I became worried we were going the wrong way somehow. After we ate, the next 6 miles passed in a pleasant blur, and we didn’t see the same trail again, so I was somewhat certain we were going the right way.  We got to our destination, a shelter, and saw the same hikers from the bar, who it turns out are southbounding just this section. Tipsy mystery solved.