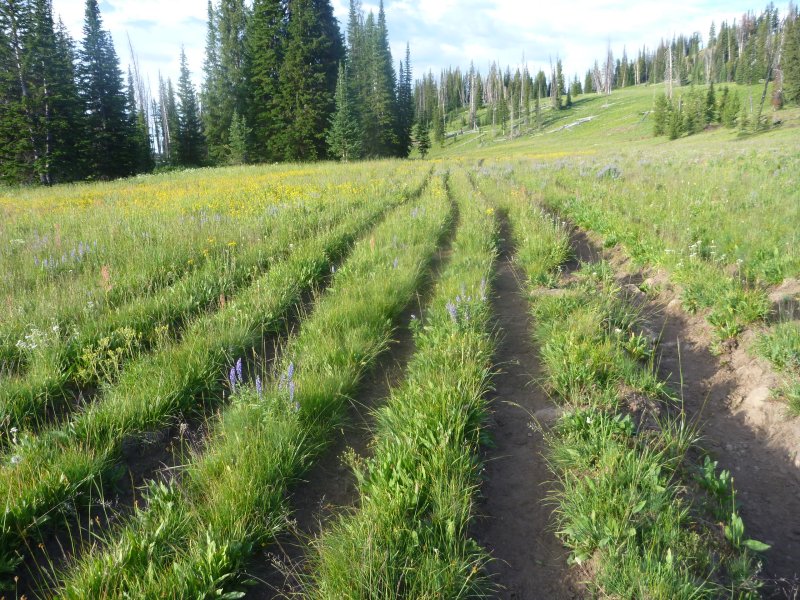 Chance never showed up where I was camped last night, so I finally had my first solo night on the trail! It went fine :). Last couple days he’s been a bit behind me, and we were probably going separate ways tomorrow anyways. I have to resupply in a town and he has a box waiting at a lodge on the trail… And the hitch to town, Dubois, is apparently quite hard. Anyways, it was a good run we had, maybe we’ll meet up again down the trail awhile.

The morning hike was a little bit harder without Chance – there is a “test” river crossing that supposedly tells you which way to go. I got to it and decided it looked OK, but normally Chance would have been there and walked right across. Anyways, it was fine, so I was able to follow the normal route instead of going around with bridges.

At lunch I managed to spill a bit of fish oil from some smoked salmon on myself and boy did it stink! After lunch it started raining, then hailing big enough I didn’t want to walk in it, luckily I was right beside a big enough tree to wait it out under. After the first wave played itself out, I hiked on but got caught by another one an hour later. Bigger hail, but again a nice tree. I got tired of waiting so hiked on, got soaked, eventually hiked out of it though!

I skipped my normal dinner and just kept hiking as the sky was still dribbling. I got close to the end of the section and was contemplating going for the end tonight, but as I came over a rise, I could see a bear in the meadow below. Plan B became camp where I was, have dinner far from camp, and finish up the hiking in the morning.

So now I’m camped out alone for night two, I smell like fish, and there’s a bear nearby. I’m going to sleep like a baby…