Today we had about  a 7 mile hike to get into town. The crows woke us up at 6 but we got up after 7 and on the trail by 7:40. Of course 7 miles and 2000 ft down to town elevation didn’t mean we didn’t start the day off with two ~500ft climbs first! It was a bit weird to be able to see town from up high around 6 miles away before dropping down. We hit the road around 10:30 then the AT actually followed the road to the highway so we had a bit of road walking (very unusual on the AT!). We had been advised to stay at the White Mountain Lodge and Hostel which is literally on the trail instead of hitching the 8 miles or so into town. I (Megan) had had a new watch sent there since I drowned mine during a rain day before Stratton, so now even if I have no idea where I am other than “on the AT” (Ryley carries the maps and I for the most part prefer to be kept in the dark since knowing whether we’re climbing 3 mountains or 4 doesn’t really seem to make any difference to me, it’s mostly just depressing), I’ll at least know what time it is! Also, I’d sent Jaimie the address on the off chance she might send me mail and she DID! It was amazing to arrive to real snail mail in town 🙂
The hostel is amazingly clean, the owner is super nice, their dog has already had 3 naps on my lap, we watched a movie, ate a pizza and a salad (I tried to order salad but all I could find was Ceasars salad, i.e. bagged romaine lettuce…).

OK many of you don’t know this but Clara Hughes is hiking the AT northbound right now (trail name Red Feather), and with the help of Jaimie I’ve been following her progress. She started in the winter and has had to leave and come back to the trail several times for work, but she is in the Whites of New Hampshire right now and I found out this morning only about 20-30 miles from us! I’ve been looking forward to running into her and meeting her since we started, but with us considering a slack pack or a day off in Gorham I was worried I’d miss her. So, my 15 year old self jumped out today and as I was telling the hostel owner, Marni, about her, Marni offered me a whiteboard and markers to make her a sign to see as she walked into Gorham, complete with promises of free Ben and Jerry’s for any Olympic Medallists! Very dorky, but I’m OK with that. 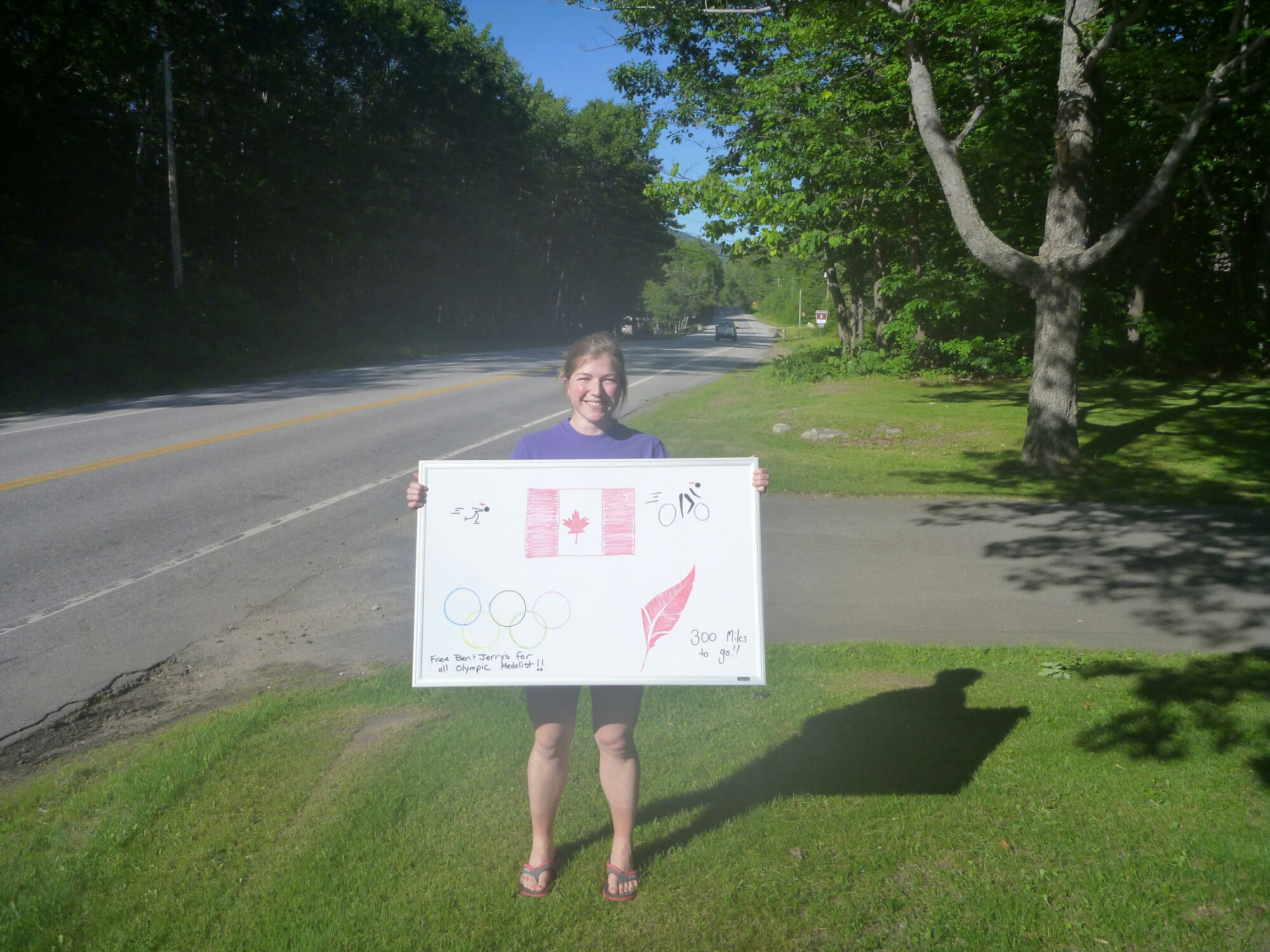 We heard she will be slack packing the same route as us tomorrow and staying at the hostel tomorrow night, so, I’ll get to meet her sometime tomorrow! Very cool!

Random side note – there is a scale complete with bioelectrical impedance fat % measurement at this hostel (which I’m very sceptical about). When I accidentally plugged in I was a ‘normal male” it said I weighed 5 lbs less than after I figured out the settings and said I was a “female athlete”. I also have a hard time believing I’ve gained weight after almost 3 weeks of hiking, even if I did eat half a pizza and half a pint of ice cream several hours before I weighed myself…

DBB: Ryley was given a cold beer on the house the day we walked into our hostel in Gorham while we were SITTING ON A COUCH WATCHING A MOVIE!!
Peak Organic Pale Ale – Peak Organic Brewing Company (Portland, ME)
Apparently a hybrid between a west coast pale Ale and a british-style pale Ale. I thought it was OK, excellent paired with the movie. Ryley liked it.