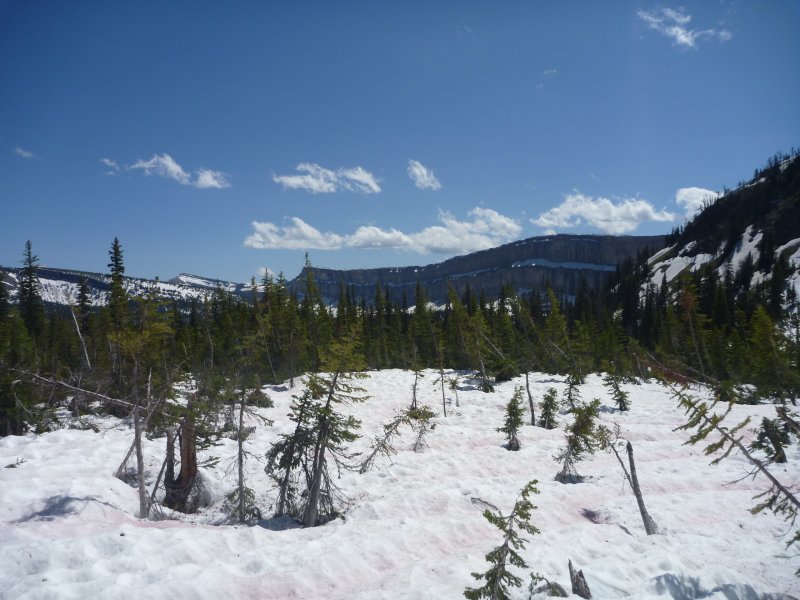 This morning we crossed Spotted Bear River twice, and it was a tough cross. Chance tried the first time himself, but quickly came back. Then we went together, with him upstream of me to break the current, and my job was to help stabilize him so he could move. It almost worked, but with the river breaking around his chest, he got pushed over and I barely was able to keep him from being dragged off. He ended up being just short of dunked before we got him standing again. We got to the other side and had a drying out in the sun, and decided the next time, I would get to go first. Second crossing went fine, further upstream so it had a bit less force, but we were very careful 🙂

Anyways, apart from the crossings, the morning was uneventful. Chance told me what each flavor of Skittles reminded him of…

After lunch we slogged our way through snow to the Chinese Wall! It was absolutely breathtaking.

The trail follows the wall for about 5 miles, so normally you’d just zip by it. Our trail was buried in snow, so we spent a good 4 hours walking by… Mostly with heads down as we tried to stay on balance in endless snow cups.

Today felt very hard. My feet have been continuously wet from snow or stream crossings since we entered The Bob, and I’m finally starting to see some ill effects. Blisters are forming under a couple toe nails, and I’m losing two more soon. Overall I can’t complain too much though… 2 weeks without any real issues in these conditions seems like a miracle 🙂